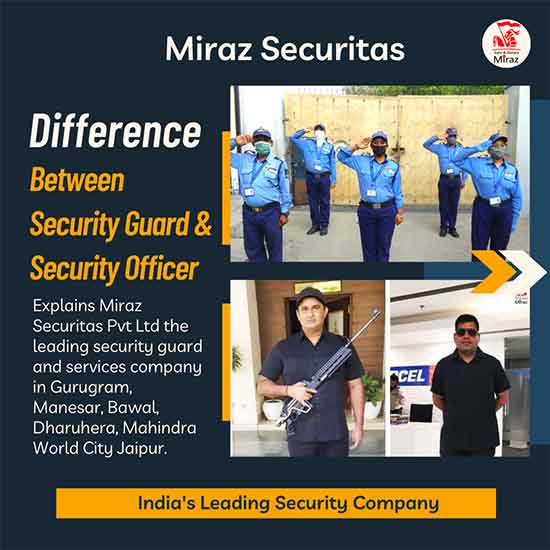 You may have often come across the terms “security guard” and “security officer” several times. To the casual observer, no difference exists between the two. The terms seem the same. To the untrained eye, all security people seem to do the same thing.

This confusion is understandable since the aim of both is the same. Both duties involve keeping something, or someone, secure. The general public is used to seeing security personnel guarding gated premises, a shopping mall, or even a public figure. Both the tasks work together to implement a unified security plan.

Besides these similarities, though, there are several differences. Differences between Security Officer duties and those of Security Guards include as described by Miraz Securitas Pvt Ltd which is a leading security guard and services company in Gurugram, Manesar, Bawal, Dharuhera, Mahindra World City Jaipur offering security services to several-manufacturing, retail, hospitality, construction, and educational institutions.

Beyond these differences, the confusion remains at the state level, also. While most states need a distinction between the two roles, their terminology is not alike, and the roles do not have a universal definition.

Further complicating things, licensing agencies mostly do not make a distinction between Security Officers and Security Guards. Agencies usually, use the terms interchangeably. The blending of the names and duties happens purposefully in certain areas since the term “officer” might lead to confusion among police officers.

What work does a security officer do?

Security Officers mostly work in a management role. They are accountable for an overall security operation. To fulfill their assignments, they will assign works and tasks for Security Guards to carry out. Since more responsibility falls on the shoulders of Security officers, they are regarded as security professionals; security is a career to them. They are expected to have a vast range of experience. From their experience, officers should exercise far more independent judgment compared to a Guard.

Several times, their duties will include training Guards. Having experience in the sector, and knowing the scope of work required, they can train Guards to fit easily within the complete security operation. Apart from to train and managing Guards, Officers are accountable for the smooth operation of security tasks at a location.

Rather than working in one post, Security Officer duties call for them to be mobile. Officers will rotate through several security stations or checkpoints, checking in and analyzing the status of the complete area. Fulfilling this role of security management needs experience, judgment, and tact.

With these bigger responsibilities come bigger pay and opportunity. A Security Officer is retained with an expectation that they will take care of the ownership of the complete scope of operation.

What work does a security guard do?

A Security Guard can be regarded as the face of the security operation. This is an individual the public will see performing security duties. A door Security Guard becomes familiar to those passing by daily.

A Guard will work under the instructions of a Security Officer. Guards are posted at several checkpoints such as doors, gates, or other parts determined to be vulnerable. A Guard will generally, stay at their assigned location. Less frequently, a Guard will patrol a restricted area.

The mere presence of a Guard might be enough to deter unwarranted activity. If deterrence fails, a Security Guard might be expected to report suspicious activity at their premises. The difference between a Guard and an Officer is majorly one of responsibility. A Guard will have restricted responsibility, and not be supposed to exercise independent judgment. A Security Guard follows and obeys the details of the security management plan.

Due to the limited nature of their work, the needs for Security Guards are less stringent compared to Security Officers. A Guard is not needed to have as much experience as an Officer, and might even have no experience. Simple needs such as fitness or IQ test might be the sole criteria used for hiring a Security Guard.

Both security officers and guards are properly trained

Though there are vital differences, both roles need proper training. The Security Officer, as the one having more responsibility, certainly needs more training and experience. However, a Security Guard should be able to execute the security plan; neglecting Guard training, or hiring badly trained Guards is a false economy. Even the finest of the laid security management plans will fail if you are not using the best trained Guards.

To make the best hiring and staffing decisions, you will need to consider the actual scope of the job you want to be done. Some tasks need the training and experience of a Security Officer. On the other side, if your risk is deemed minimal, a well-trained Security Guard might be more than sufficient.

Irrespective of which professional you need, it is paramount that they are properly trained. The training needs can depend on the kind of risk to be managed. certain training for Security Officers and Guards can include:

When sourcing security professionals, you will want to make certain candidates’ training matches your actual-world needs. Working with a security solutions provider such as Miraz Securitas can hugely boost the quality of your security personnel. 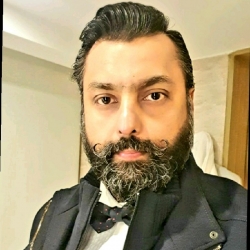 Under the successful leadership of Mr. Mahajan, Miraz Securitas Pvt Ltd today has achieved an over 100% growth rate within half a decade time. His vision for upgrading private security service has helped Miraz Securitas established a footprint PAN India. Today Miraz ,a trusted name has clients , across all market segments such as top universities, private & international schools, prestigious institutions of government of India, retail establishment, & more.

How To Ensure Security of Trade Show Exhibition in India?

How to Hire a Good Bodyguard in India?

Why Indian Nightclubs Must Hire Hospitality Trained Bouncers and Security?